Do You Have Enemies? Good.

Do You Have Enemies? Good.

“You have enemies?  Good.  That means you’ve stood up for something, sometime in your life.”

In High School, the kitchen was the centerpiece of our home.  That’s where people gathered, whether for a meal, a word of advice, or a good laugh.  And one of the key pieces in any great kitchen is a fridge.

That’s why I got weird looks when I put up a newspaper clipping front and center on our Frigidaire in 2009.  But this wasn’t a clipping you’d expect a kid to hang up: perhaps one celebrating his favorite sports team, promoting the upcoming town fair or, God forbid, one that actually recognized me in any way, shape or form.

No, it was a picture of a blonde-haired boy hitting a forehand volley on a tennis court. The boy’s name was Bjorn and the premise of the article was comparing him to Bjorn Borg.  Borg is largely considered one of the top tennis players of all time, which makes the comparison to a 16-year-old seem a bit ludicrous.

But it went deeper than that.  I was a competitive tennis player growing up and had (and still have) a sick competitive side.  I once came home and bragged to my mother that a friend told me that “I was the most competitive person he knows”.  Clearly an insult in everyone’s eyes except mine, I took it as a high compliment.

Which brings me to Bjorn.  He may not have been on track to become the greatest of all-time like his namesake, but he had a lot going for him.  He was athletic, came from a wealthy family and girls seemed to like him. He was also very cool, which is not always easy to do as a tennis player named Bjorn in the Massachusetts suburbs.  I fucking hated Bjorn.

In hindsight, it’s no offense to him.  He didn’t do anything wrong. But I wanted to be the best.  I wanted the athletic prowess, the girls, the newspaper clippings.  And Bjorn was what stood in the way.

So when I saw his mug on the cover on the Sports section in the Eagle-Tribune, I immediately plunged for the scissors, cut the picture out and stuck on the front of our fridge.

It stayed there for months, throughout training and the beginning of the season.  “That’s kind of weird”, people would tell me. Strangers and family friends would ask why this boy was the only thing on our fridge when visiting for a holiday meal.  I didn’t care.

Every morning and every evening I’d see his face.  I’d see the headline. And I’d visualize my upcoming success in the next season. 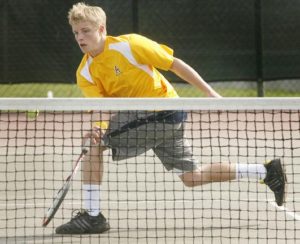 I’m far from the first to use this tactic for motivation.  Our company recently had Harry Dixon come in as a guest speaker to our sales team.  If you’re unfamiliar, Dixon helped to take EMC from a $600m company in 1985 to a $9B business in 2000 as the person leading their sales team.  That’s a 1,500% increase. Wow.

Dixon brought us back to his first few days at EMC, coming fresh out of college, after being rejected from every other company he applied to.  “I looked around and saw a group of other salespeople. I would pick them off in my head one by one. I’m going to crush you, you, you and you…”.   I liked him immediately.

I didn’t get a chance to ask Dixon if his competition ever made it on his fridge.  And that detail isn’t necessarily important. It’s the act of finding a nemesis.

Michael Jordan had Leroy Smith, his high school friend that took the last Varsity basketball spot, leaving Jordan in the dust.  He would use Smith’s name as a pseudonym when staying at hotels during the peak years of the Chicago Bulls’ fame.

Many famous musicians of rap and rock n’ roll have picked an authority figure or institution and used that as fuel.  Dixon had his sales class. I had Bjorn.

They say to keep your friends close and your enemies closer.  That’s exactly what I’m prescribing. Keep your enemies so close that every single day, you see their face, their name, the status they’ve achieved.  So you can surpass them. So you can dominate them.

Oh, I almost forgot to mention.  I played three matches against Bjorn that year and won 2 out of the 3, helping to propel me ahead of him in Conference MVP voting for the year.