I saw a post this week that illustrated how a man in India planted a tree every day for 35 years and created a forest larger than Central Park.

This feat is quite outstanding for multiple reasons.

First, it’s a selfless act.  When the man began planting trees 35 years ago, he probably wasn’t sure whether or not he would personally reap these rewards of a shady tree to lay under on a hot summer’s day.  Because, well, trees take a long time to grow. Who knew what life would have in store for him?

Second, it’s massively consistent.  I don’t know the full story here. I wasn’t following this man around every day for 35 years.  But my guess is that if he didn’t do it every single day during that stretch, it was close. It’s hard to half-ass something for 35 straight years.

Third, the rewards are massive.  Even if he did want to half-ass this project, the results would catch him in the act.  35 years is over 12,000 days of planting trees. If he only planted when he felt like it – maybe 1,000 times, the results would not be as massive.  Very successful, but not at the scale that he achieved. The proof, as they say, is in the pudding. 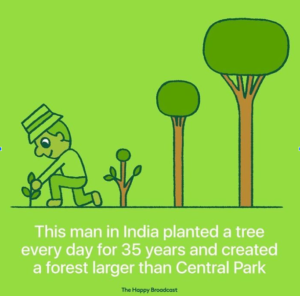 Shouldn’t we all be doing this?

Maybe it’s not a physical tree.  Maybe instead it’s introducing two like-minded people that you know will hit it off.  Maybe it’s wishing happy holidays to someone you haven’t spoken to in a while. Maybe it’s taking the “no” your customer says hit you in the face and wash off your back like cool rain.  Or maybe it’s just putting that cup of coffee next to your wife’s bedside table like you do every morning, even though you’re in a rush.

The holidays are a particularly great time to plant trees.  There’s a built-in excuse to share your goodwill with strangers and friends alike.

I have a list of customers, mentors and role models running in Evernote.  You better believe I emailed or texted each of them asking for their best physical address – and if they answered, they got a handwritten note.  You know I hit up some old friends with good wishes on text. And you bet your ass I told my team members how much I appreciated their effort this year.

There’s a scene in the movie Billy Madison where Adam Sandler’s character (Billy Madison) is competing in an academic decathlon against his sworn enemy.  During this scene, a man that Billy went to school with years ago shoots the enemy right on stage. Earlier in the movie, Billy called this man to apologize for bullying him in school, prompting the man to cross Billy off of his “To-Kill” list.  Billy’s response to this wild development on stage? “I’m glad I called that guy!”. 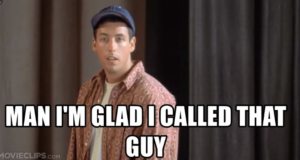 Billy planted a seed with that phone call.  He didn’t know it at the time, but that seed saved his life.

Not every seed that the Indian man left in the dirt resulted in a tree.  Each successful venture takes some luck – and it’s a numbers game. Just as every handwritten note I write will not be responded to – or possibly even opened.

The goal is to create your own forest – your own Central Park – of people that know and respect you.  People that speak well of you, that know what you’re all about.

Because one day, you’ll need something: whether it’s normal business or a ridiculous scene in Billy Madison.  These people – these trees – will be the ones who come to your aid.

Plant a tree every day and watch the world around you bloom.