It’s Not The Critic That Counts (An Appreciation Post)

It’s Not The Critic That Counts (An Appreciation Post)

I remember when I first started releasing blog posts, over two years ago.  People gave me a hard time. My coworkers and “friends” would say “Why are you doing that?  You don’t know how to write. Who are you trying to inspire? Stop clogging up my Instagram.  Give it up.”

But I had no choice.  It’s what I was being called to do, like a gravitational pull.  Learn, teach, inspire others.

Besides, the people that I looked up to were doing this stuff.  Or at least doing something to put themselves out on the line.

As I gained more traction, those nagging voices continued.  Sarcastic comments on a post. People leaving you high and dry.

I guess it’s true what they say about crabs in a bucket.  If one tries to climb out, the rest will try to drag him down.

Then one day, I came across a speech from Theodore Roosevelt, where he makes his remarks on being “The Man in the Arena”.

“It is not the critic who counts; not the man who points out how the strong man stumbles, or where the doer of deeds could have done them better. The credit belongs to the man who is actually in the arena, whose face is marred by dust and sweat and blood; who strives valiantly; who errs, who comes short again and again, because there is no effort without error and shortcoming; but who does actually strive to do the deeds; who knows great enthusiasms, the great devotions; who spends himself in a worthy cause; who at the best knows in the end the triumph of high achievement, and who at the worst, if he fails, at least fails while daring greatly, so that his place shall never be with those cold and timid souls who neither know victory nor defeat.”

I can’t say it better than that myself.

That’s why it’s okay for Bill Belichick to give reporters shit at a press conference.  That’s why it’s beautiful that Kanye dropped an album focused on the least mainstream rap topic he could find, Jesus.  And that’s why it’s not up to you what type of art Amanda Palmer makes.

I recently converted my bedroom closet into my writing studio.  The walls are covered with books and sticky notes and pictures of people I admire.  The men and women in the arena. I’ve listed some of them below. Check them out, show them some love.  Without them, I may not be producing what I am.

And if YOU are in the arena, there’s no doubt that there will be bad days.  Days where people don’t appreciate you. Days where you not only want to give up, but you forget how you got here in the first place.

I had one of those days a few months ago and bought the Roosevelt quote and hung it up in my room as a reminder. 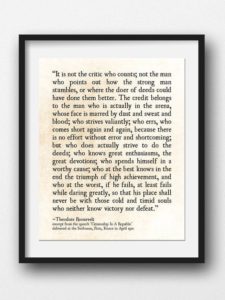 Maybe that day is today for you.

Always remember: it’s not the critic who counts.

The credit belongs to the men and women in the arena.

Check your face in the mirror.  If you’re covered in the “dust and sweat and blood” that Roosevelt projects, good work.  You’re on the right track.

If you’re not, what are you waiting for?

Some love & gratitude (but not an exhaustive list by any means):